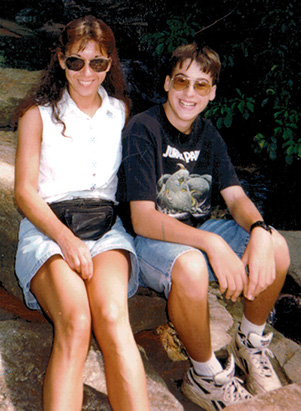 To kick off  my brand spanking new and snazzy beer blog I would like to introduce myself and share my reasons for creating this site.

My name is Matt and like many others before me, my journey into a love of craft beer has been a meandering one.

When  I was about 10 years old there was an unusual fad going on in my elementary school.  Seemingly out of no-where sour candies had become so popular that kids were bringing them to school and trading them on the playground.  With names like Goosebumps,  Tear Jerkers, and Warheads,  these candies were ultra-sour (being coated in lactic, citric, and malic acid).  Not to turn away from a good fad I became instantly hooked.  While most kids eventually grew tired of punishing their taste buds with these tart bombs, I developed a life-long taste for sour flavors at this age.  Within a year or so, when most of these candies faded from the market, I was in the habit of putting large doses of lemon juice into my water and savoring the citric acid flavor that would tingle on the back of my tongue and pucker my cheeks but was oh so refreshing!  To this day I start to worry if I have fewer than 3 or 4 large bottles of lemon juice in my pantry.

I had my first memorable experience with alcohol at age 14 when I tried a few shots of tequila and maybe a sunrise or two on New Year’s Eve.  I remember laying in bed that night with the euphoric buzz of alcohol relaxing my muscles and elating my brain.  The next morning I woke up feeling like a million bucks. Wow! This stuff was awesome and I looked forward to having a few more shots on occasion with my friends at sleepovers.  At some point around age 16 I threw a small party with friends and managed to put down about 10 or 12 aforementioned tequila shots.  This time the next morning I felt like someone had run me over with a truck. At the time, this was the worst feeling I had ever had and I didn’t think it was possible to feel any more sick (Years later while in college I proved myself wrong and worked myself into the worst hangover in my life… I think the dry heaving subsided about 8pm the night AFTER the party).  At any rate I swore off alcohol for several years and didn’t take it back up until I tried my first beer several months before my 21st birthday.

I  made my way through college studying chemistry and biology and progressing on to earn my doctorate in pharmacy.  Throughout these years my enjoyment of beer was tied largely to the social aspect of drinking with friends and I didn’t pay much attention to the quality or flavor of the beers I consumed.  After graduating I found myself hosting a great number of parties at a seasonal property I had purchased and built a cabin upon. 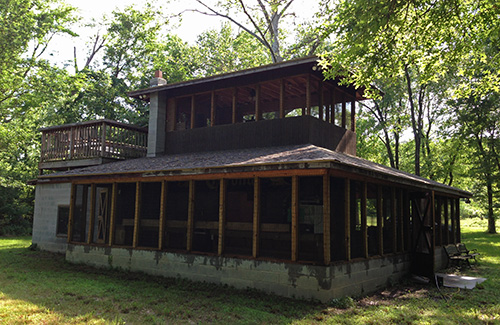 –I’ll interrupt my narrative for a moment here to explain that I’ve always had a great deal of interest in creating my own versions of things.  Even if they could be more easily bought, I very much enjoy the satisfaction of making things myself.  In high school, I made my own website detailing my hobby of cultivating carnivorous plants. Additionally, I wrote and self-published a book on antique stoneware during my senior year.  Later, while in pharmacy school, I took great pride in building the cabin which became the location for my parties.–

Back to my story… There reached a point during my social hosting that I decided that since I had built my own cabin and was hosting my own parties, what better an idea than to brew my own beer to serve at said parties!.. And this was the idea that ultimately breathed life into my now fully mature appreciation of beer.

As a homebrewer, I began to drink a far wider variety of beer styles.  By tasting and trying to understand the flavors in my own beer, I slowly began training my palate to the multitude of potential flavors and aromas present in the different beers that I both bought and made.

One night I was at a local bar drinking with friends and I ordered a “chocolate covered raspberry” which sounded delicious and turned out to be a mixture of Young’s Double Chocolate Stout and Lindeman’s Framboise.  It was indeed very tasty and I found myself shortly thereafter purchasing a case of both beers to keep at home so I could mix these babies up on the regular.  This was really the point at which I began to read about and get interested in the so-called “lambic” beers of Belgium.  As a pharmacist I luckily had a fair amount of disposable income to put towards my interests but I still found it a bit incredible that I had just shelled out over $120 dollars for a case of beer! (I would love to be able to buy some of the lambics I now stock in my cellar at those prices). 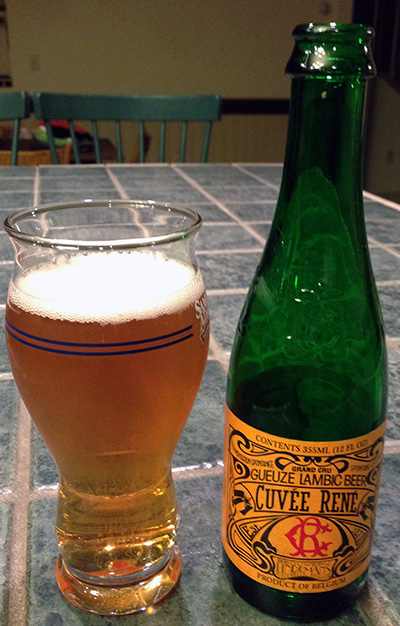 Now that I had excess Lindeman’s Framboise on hand I tried some by itself and found it to be a very sweet candy-like fruit beer, not easy to drink in volume on its own…  But oh my! Deep under all that sweetness was a flavor from my childhood that I had never stopped craving.  The distinct twang of sour lactic acid was distinctly present in this beer and this got me really interested in the lambic styles.  I tracked down a bottle of Lindeman’s Cuvée René Gueuze and loved it.  My local beer distributor didn’t have that beer by the case but they did have one dusty old case of another gueuze in the back. Made by Hanssen’s Artisanaal, it appeared to have been sitting there un-purchased for some time.   I asked the manager if they could look up the price for me.. $225 for 24 bottles.. This stuff was pricey!  (Once again- I love to find good lambics at those prices now).  Never-the-less I took the plunge and drove home post-haste to taste one of my new acquisitions…

THIS BEER WAS AMAZING!!  Completely outside of the box from anything I had ever drank before.  The gueuze was mouth puckeringly sour, smelled of funky blue cheese and leather, and was extremely dry. Despite these seemingly bizarre flavors, the beer was very effervescent and refreshing.  I was hooked immediately and drank down several more bottles that day before I decided it may be better to slow down and savor my investment. Especially since it seemed that the case may have been a lost orphan that had made its way to my local distributor, not easily replaced once it was gone. 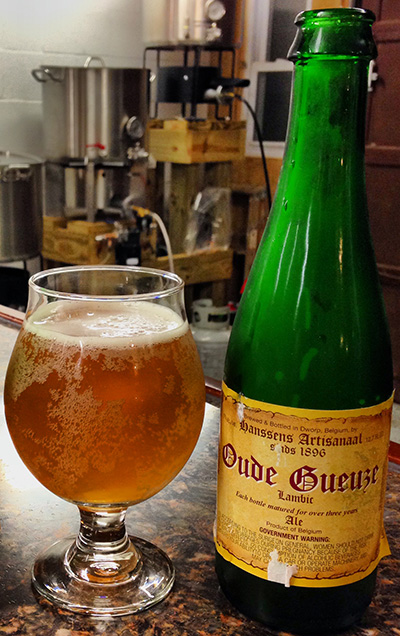 I’ll wrap up my narrative by bringing you to the present day, six years after my first case of gueuze.  I am still an avid homebrewer who enjoys brewing a variety of both “clean” styles as well as sour and funky wild ales chock full of Lactobacillus and Brettanomyces.  I have continued to track down and taste as many examples as possible of the traditional lambics and sour beers from Belgium as well as the ever expanding selection of American craft brewed wild ales.  Additionally, I have never ceased enjoying the creation of my own things.  Thus, I am embarking on my most recent creation, this website, which I intend to use to share my insight and experiences in the world of brewing sour and farmhouse ales, as well as a portal through which I can celebrate the wonderful world of sour beers through reviews, interviews, and articles.

I believe that from the time I was young I have had a palate geared towards understanding the varied and complex flavors within the sour spectrum and I hope to employ this to write useful and detailed reviews about the beers that I try once, as well as the beers that I come back to time and time again.  I intend to be honest and non-biased, and while I do not intend to blast any brewer who has worked hard to produce a product, I will be honest if I feel that the product has flaws or could be significantly improved.

Furthermore, I have noticed a trend in sour beer reviews that I read frequently on sites such as RateBeer and BeerAdvocate.  The problem I have encountered is that most flavor descriptors used to refer to sour beers are still used in the same context as traditional “clean” (Saccharomyces only fermentation) beer descriptors.  Every single sour beer I read about is “tart”, “sour”, “funky”, “farm-yardy” and the like without anyone actually establishing a baseline range for understanding these flavors.  For example:  It is far more useful to describe a beer’s sourness as halfway between a Cuvée René Gueuze and a Cantillon Gueuze, than it is to say “noticeably sour”.  It is my intention to create such dialog and vocabulary on this site so that the articles and reviews here may be truly useful to those learning the nuances of these styles and to those looking for which bottle to plop down their hard earned money on next.

I am looking forward to interacting with the ever growing community of sour beer enthusiasts and I look forward to all the sour beers I will have the excuse to drink in order to create content for the site!  All in all I’m very excited and I hope you will be too! 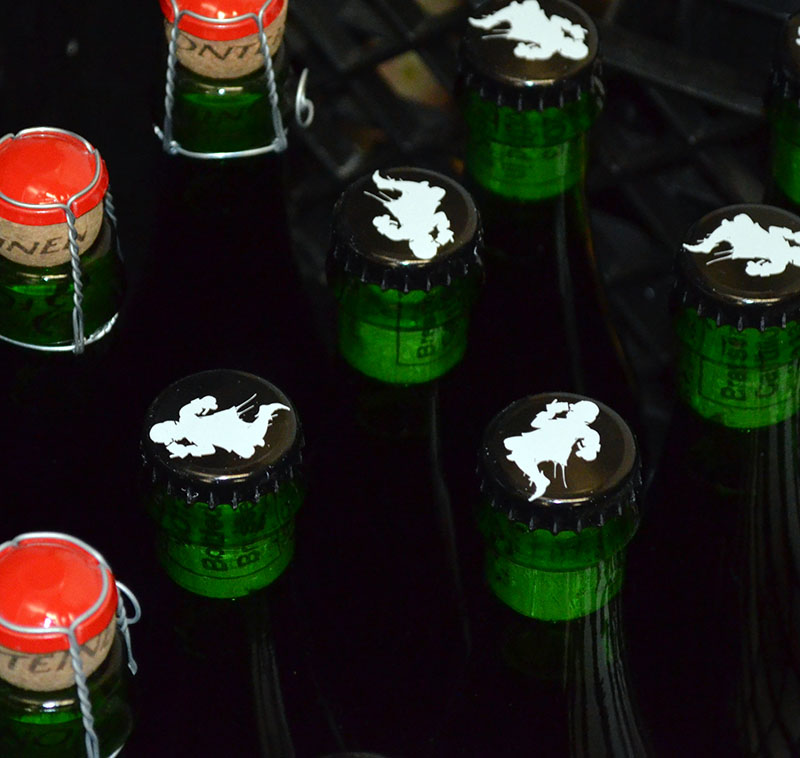