After several months of planning and collecting beers, I hosted my first sour beer dinner on Friday, July 11th! The dinner featured 21 different Krieks split up into 5 flights.  Each flight was paired with food and designed to highlight a different characteristic of the style.  With 8 total participants, the event was small but also very entertaining and educational for those involved.  In addition to several sour beer fans from my local homebrewing club, two authors for this site (Cale Baker and Carlo Palumbo) were in attendance.  Furthermore, Carlo both designed and prepared the awesome food menu that accompanied the beers.   In addition to being a social event, the night focused on education regarding Kriek lambics and I believe left the participants with an excellent sense of the range of the style. 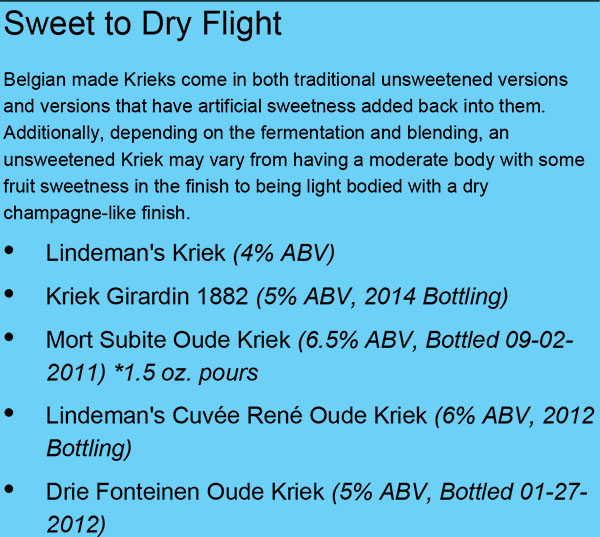 Kriek is a traditional style of sour beer from Belgium in which a lambic base beer which has been aged for one to several years is blended with fresh sour cherries and allowed to referment before bottling.  Commercially, there are more Krieks produced by lambic breweries and blenders than any other variety of fruited lambic. 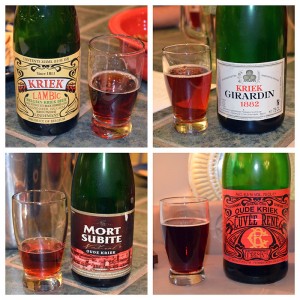 Our first flight of the evening was designed to contrast the varying levels of dryness in the finish of commercial examples.  We started the round with several Krieks that are back-sweetened before bottling and finished the flight with two varieties that are fermented to a high degree of attenuation.  In these latter examples, the beer’s dry crisp finish is reminiscent of a dry red wine like Cabernet Sauvignon or Pinot Noir.  Additionally, Krieks may also have a tannic character deriving from either the seeds and skins of the cherries, the oak barrels they age in, the or grains used in the base (which in lambic brewing are often sparged very hot to extract astringency).  These tannins often provide a pleasant complexity to both the flavor and mouthfeel of lambic beers as well as produce additional dryness in the finish.  In my experience, a dry finish in practically any beer style makes the product more refreshing and increases drinkability.  During our first flight we also shared a bowl of mixed nuts with currants, baked in brown sugar and cinnamon. 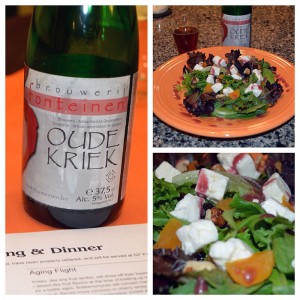 In our sweet-to-dry flight, the product that really stood out to me was Lindeman’s Cuvée René Kriek.  I was expecting the Drie Fonteinen Oude Kriek to be both delicious and world class (which it was), but due to my previous experiences with the very sweet and almost fruit-soda nature of Lindeman’s standard Kriek, I was not expecting great things from their Cuvée René.  Very happily, I was proved wrong in this assumption.  The Cuvee Rene Kriek was not only pleasantly sour but also proved to be the most intensely dry beer of the night.  The Cuvée René Kriek also had a nice layer of Brettanomyces funk on par with examples from Drie Fonteinen, Cantillon, and Hanssens.  Additionally this Kriek had an intensity of cherry flavor which made many of the other beers of the night taste mild in comparison.  Stay tuned to the website because this is one Kriek for which we definitely will be writing a full review about in the near future! 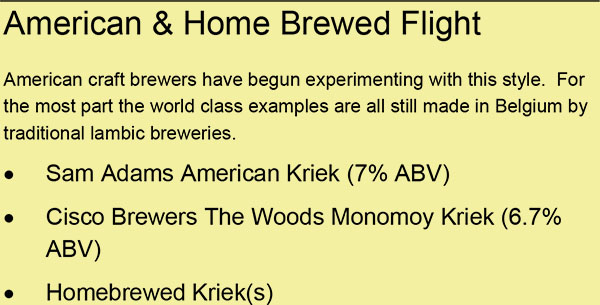 Our second flight provided a brief departure from the classic Belgian examples that made up the rest of the night by featuring two American made Krieks and one home brewed example.   Additionally we served a mixed greens salad with walnuts, dried apricots and cherries, topped with feta cheese and homemade blueberry vinaigrette.  The American Kriek produced by Sam Adams should not be considered part of the style but rather a nice Belgian Brown Ale with cherries and a light oak and vinegar character.  This beer proved to be the least sour drink of the night.  Monomoy Kriek by Cisco Brewers was significantly better, being clearly recognizable within the style. 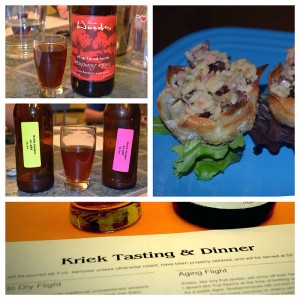 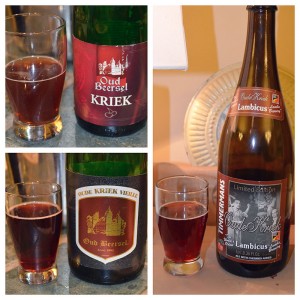 Our third grouping of Krieks focused on Brettanomyces characteristics, moving from cleaner examples to funkier ones as the flight progressed.  These beers were accompanied by our appetizer:  Baked wonton bowls with rabbit and wild rice, topped with duck bacon, pancetta, and an orange pineapple glaze.  We began the flight with two examples from Oude Beersel, a sweetened and unsweetened Kriek.  These were both lacking in anything but the faintest of Brettanomyces character.  I could not personally detect any Brettanomyces character in the standard (sweetened) Oude Beersel Kriek, while the Oude Kriek Vieille (dryer) had light notes of hay and leather. 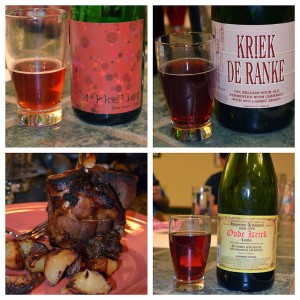 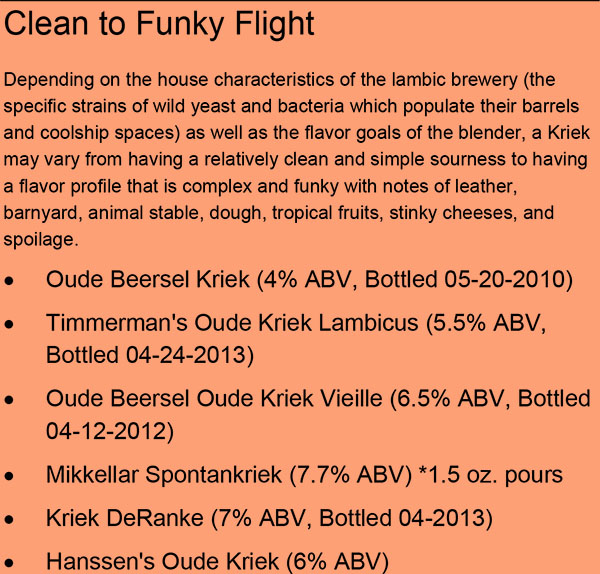 This was my first time drinking a Timmerman’s Oude Kriek Lambicus and this beer was another pleasant surprise for me.  While many Timmerman’s products are sweetened, this Kriek was not only very dry but also ranked as one of the most sour beers of the night, being tied with Cantillon’s Lou Pepe 2009.  The Oude Kriek Lambicus was also one of the most highly carbonated and effervescent beers of the night, which was a nice reprise from the syrupy sweet Oude Beersel Kriek that we tried immediately beforehand.  We ended our funky flight with a Kriek DeRanke which was an all-around solid example and a Hanssens Oude Kriek, which was heavy with Brettanomyces character.  Similar to their Oude Gueuze, Hanssens Oude Kriek pops with a bracing sourness followed up by notes of wet hay, farmyard, musty basement, wet leather, and bleu cheese.  This Kriek is rounded out by a dry finish, high carbonation, and pleasant cherry-wine flavor.

We finished our third flight by serving our main entree which was bone in pork tenderloin shank brined in apple juice and brown sugar, baked and served with rosemary roasted potatoes.  The meal was excellent and offered us a chance to reset our palates after tasting the first 14 Krieks. 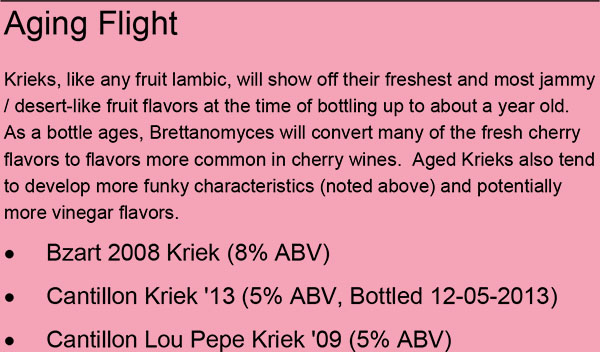 Our fourth series of Krieks allowed us to examine differences in flavor that occur with age.  We began the flight with a Bzart 2008 Kriek which, while still good, had developed the most vinegar character of any of the evening’s samples.  While some lambics may age beautifully for up to around 30 years, it is unfortunately very possible that any individual bottle may become more and more vinegary with the slow ingress of oxygen that can occur in a corked and caged product. 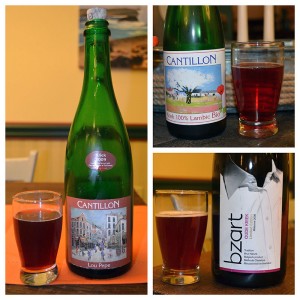 Next we sampled two offerings from Cantillon: their 2013 Cantillon Kriek and their 2009 Lou Pepe Kriek.  Cantillon’s traditional Kriek is made using one-year old lambic base while their Lou Pepe Kriek is blended from select barrels of two-year old lambic.  In our tasting the young Kriek was slightly less sour and less funky than the Lou Pepe.  While both beers had the same perceived level of attenuation and dryness in the finish, the Lou Pepe did show some of its age with light vinegar notes that were completely absent in the 2013 Kriek.  Additionally, the jammy, desert-like, fresh cherry juice flavors of the 2013 example were replaced by a more wine-like fruit character in the 2009 Lou Pepe Kriek. 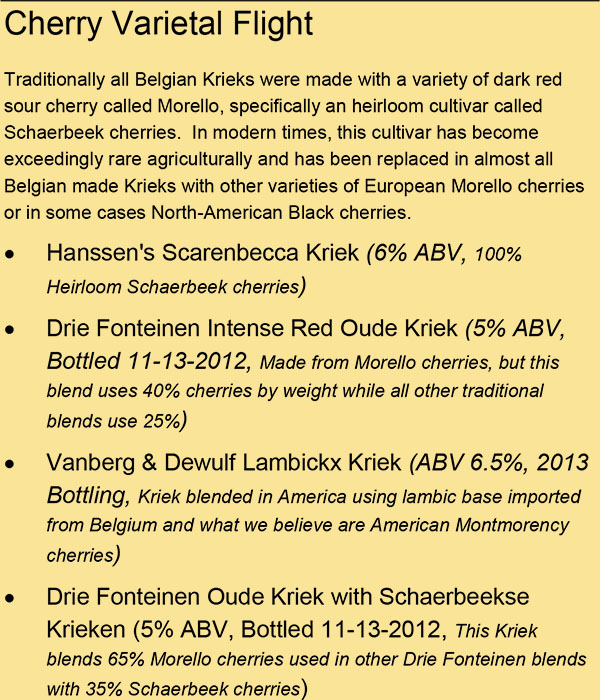 Our final flight of the evening showcased several Krieks that are made using special varieties of cherries or, in the case of Drie Fonteinen’s Intense Red Oude Kriek, the use of more cherries in the recipe than traditionally called for.  We served these final beers with our dessert: Dutch chocolate ice cream in waffle bowls topped with homemade cherry syrup.  The four Krieks served in this final round were all well-made and delicious examples of the style.   In my opinion, each example in this group combined 4 key factors which are the hallmarks of an excellent Kriek:

1. They all had a souring level on par or slightly above the natural sourness of a tart cherry.
2. They each showcased a pleasant level of Brettanomyces funk and lambic character while maintaining low levels of vinegar or acetone.
3.They all presented the full characteristics of real sour cherries including the flavors of jam or pie-like fruit, the pleasant tannins and light astringency of cherry skins, and the vanilla and almond flavors of cherry pits.
4.  Each Kriek was well attenuated with a pleasant dryness in the finish which was further enhanced by some neutral oak character. 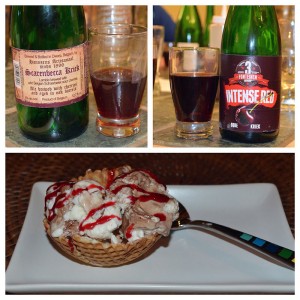 Check out our full review of Drie Fonteinen’s Intense Red Oude Kriek here and stay tuned to the site for full reviews on these other three wonderful Krieks as well. 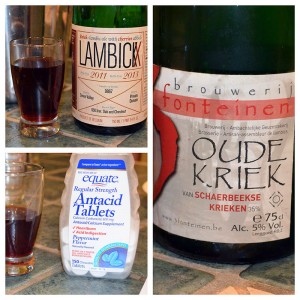 Overall, this was an awesome experience for me both as a host and as a sour beer enthusiast.  I am very happy that I was able to share these beers with my friends as well as utilize the experience to educate my readers and fans of the site.  If anyone is interested in organizing their own sour beer events and would like advice or creative input please do not hesitate to contact me.  Carlo and I had such a good time with this Kriek tasting and dinner that we are already beginning to plan an event for Autumn which will highlight American sour beers.   Hopefully reading about this will motivate some of you to attend or sponsor your own sour beer events.  Keep on drinking, promoting, and celebrating these amazing beers! 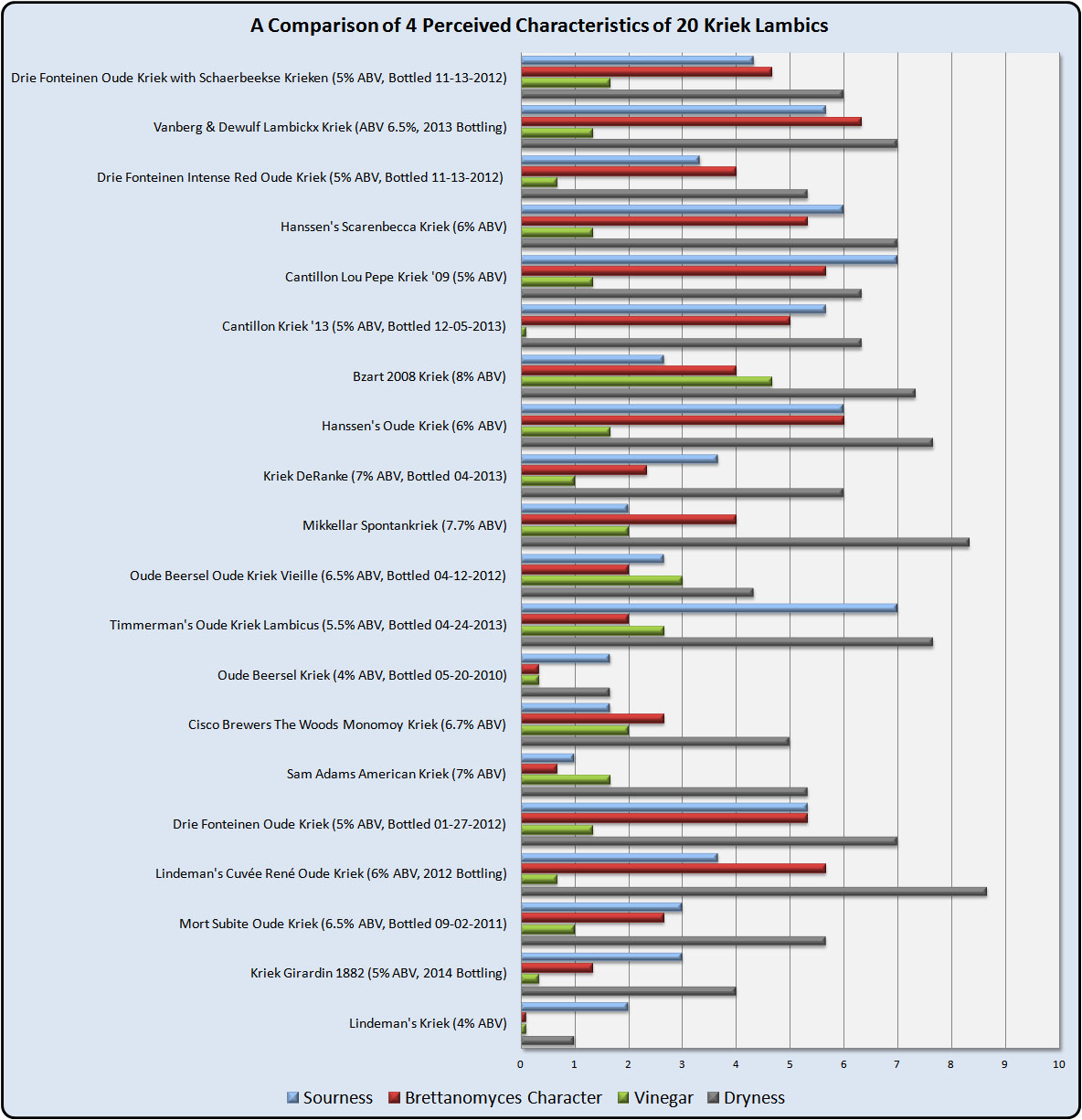 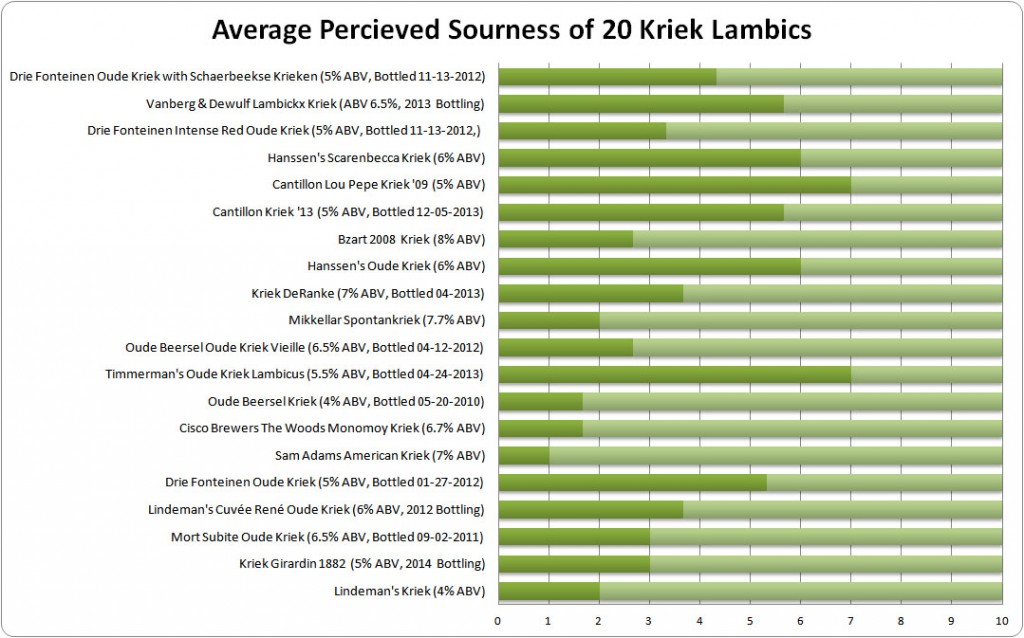 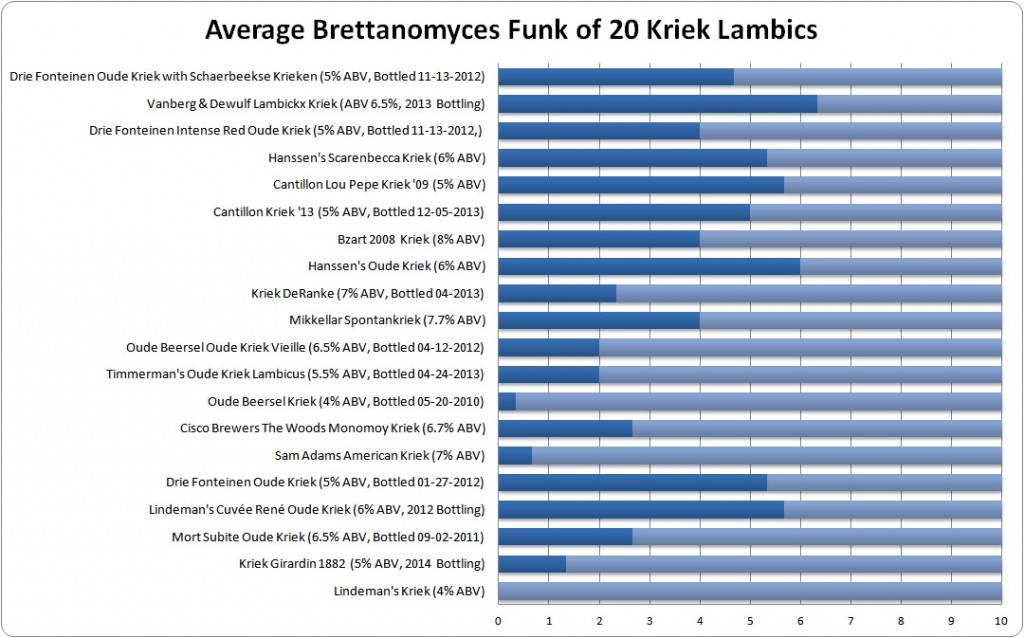 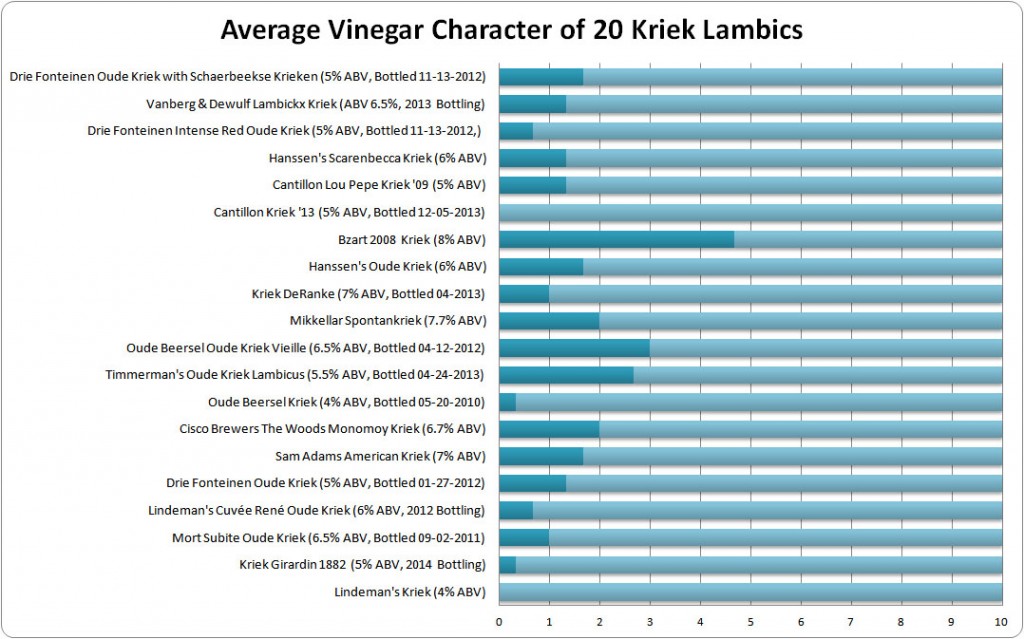 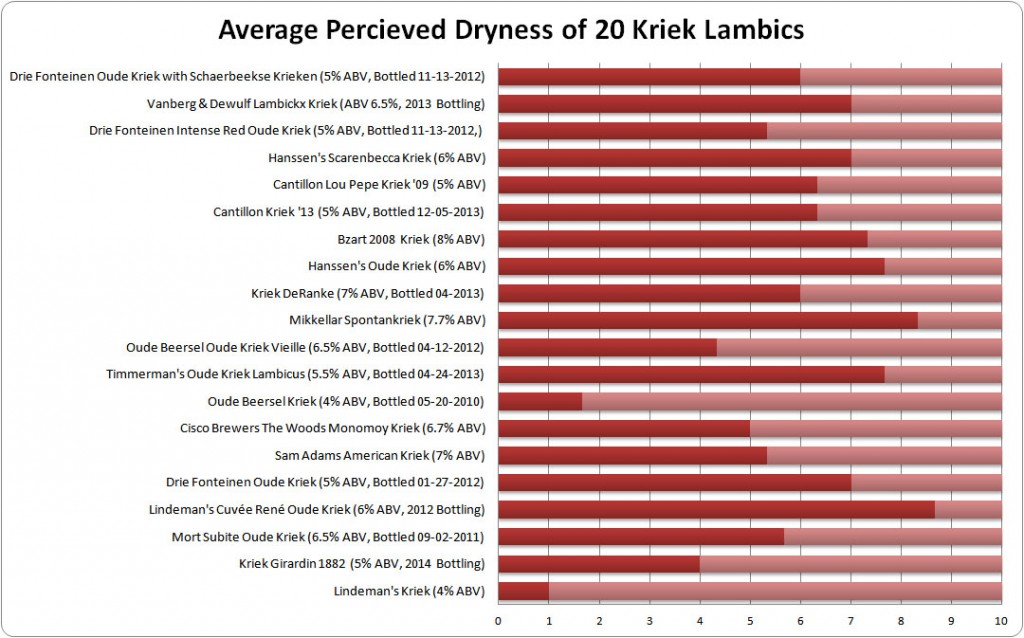 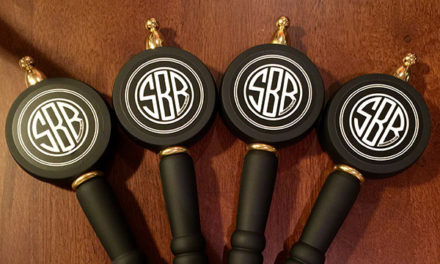 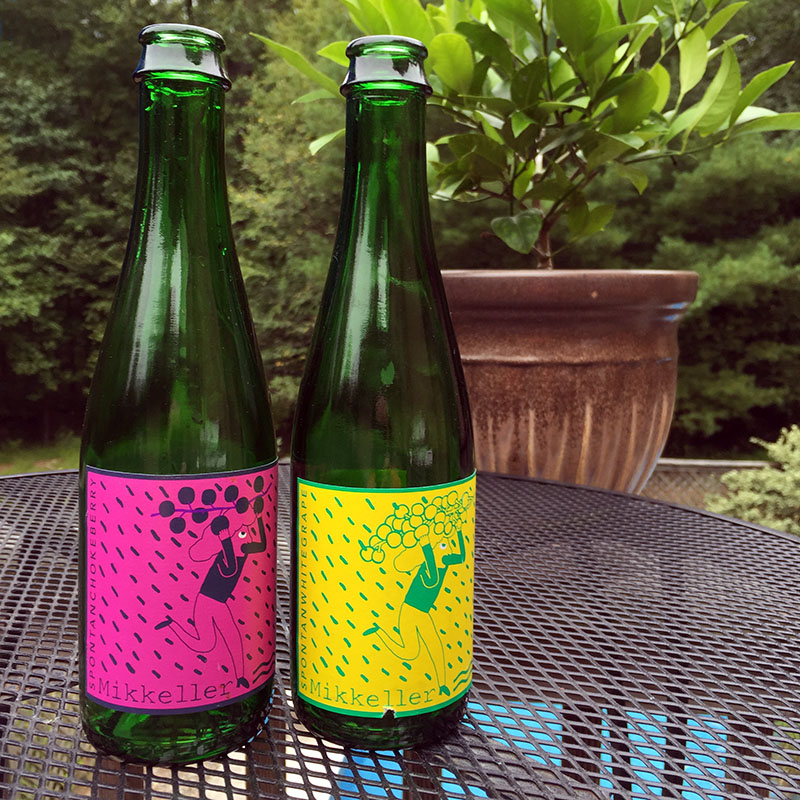